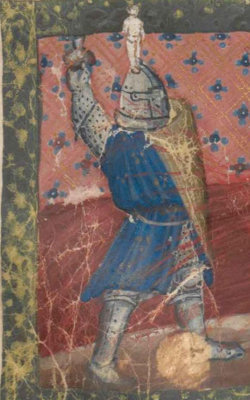 Handgrenades are explosive projectiles; they consist of the casing, the explosive charge and a fuse. Depending on the desired effect, a distinction is made between fragmentation, incendiary and smoke grenades. The mostly uniform fuses are designated wiht delayed-action) or non-delayed-action).1)

Earthen vessels, which are interpreted as shells, have been documented above all from the Orient since the 13th century.2) Originals from Central Europe, some even with preserved filling, exist from the 16th and 17th centuries. Historical fireworks books, including that of Martin Merz (*1425 ,†1501) however, mention this type of grenades as early as the 15th century.3) Besides grenades made of thick-walled clay, there were also those whose bodies were made of wood, metal or glass. They were filled with black powder. When detonated, the ruptured parts of the shells had a damaging effect on people, animals and objects. This effect could be increased by adding shrapnel such as iron parts, nails or pieces of flint to the powder charge. The grenades were lit with a fuse, smaller hand grenades were thrown at the enemy by hand and larger ones with slinging devices, such as lever spoons or catapults. Ceramic grenades in particular were very easy and cheap to produce with historical means.4) Grenades made of iron and glass were more complex to produce. Surviving originals of ceramic hand grenades are, for example, from Ingolstadt, Pappenheim castle (Germany)5), Forchtenstein Castle in Austria, the Veste Oberhaus in Passau (Germany)6), Alt-Ems Castle in Vorarlberg (Austria)7), or the Swiss cities of Basel and Zurich. Hand grenades from the Württemberg fortress of Hohentwiel (Germany) are not only known from written sources, fragments of several ceramic hand grenades were found during excavations there..8) 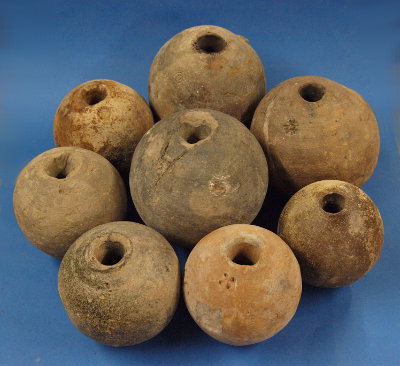 The most extensive find of early modern ceramic hand grenades comes from the German city of Ingolstadt, where several hundred pieces were found in 1983 during the construction of an underground car park in a former city ditch. These grenades have outer diameters between 10 and 19 cm, with the powder chambers usually making up about a third of the diameter. The weights of the pieces range from 1.3 kg to 4.7 kg without powder filling. The inner diameters of the carefully worked and grouted mouth holes range from 18 to about 45 mm. The surfaces of the grenades are very carefully worked in many pieces, in others only roughly finished. The shell bodies themselves were formed from fine to coarse clay on the potter's wheel and fired at a relatively high temperature. A few garnets have a pronounced stoneware glaze over the entire surface, most show this only partially and a large proportion show none at all. A number of garnets have stamped marks which can be interpreted as potter's or workshop marks. Overall, however, the preserved pieces do not reveal any particular standardisation in shape, size or quality, so even misfired pieces were used that were considerably deformed or damaged. Even within the individual pottery mark groups, the pieces show an unusually wide range of quality.9)  About 30 wooden fuses in various designs have been preserved with the grenades.10) 20 years before the Ingolstadt find, ceramic grenades were also found in 1963 in a backfilled ditch near the Allerheiligen Hofkirchte of the Munich Residence.11) They are identical to the Ingolstadt pieces, they have identical marks and come from the same workshops. 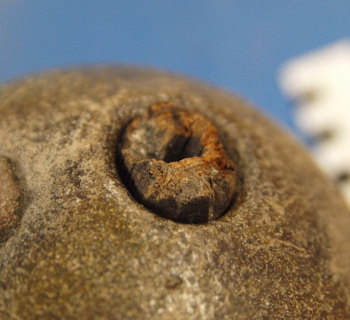 The shell fragments found by Markus Schußmann from Pappenheim Castle show clear similarities in shape, size and make with the smaller Ingolstadt pieces.5)

We are not aware of finds of historical hand grenades from Hamburg; there is only written evidence of them. An inventory from the year 1642 lists several hundred „Hand=Granaten” (hand grenades) in the equipment of Hamburg's armouries, bulwarks and fortress towers, but without providing more detailed technical information.18) 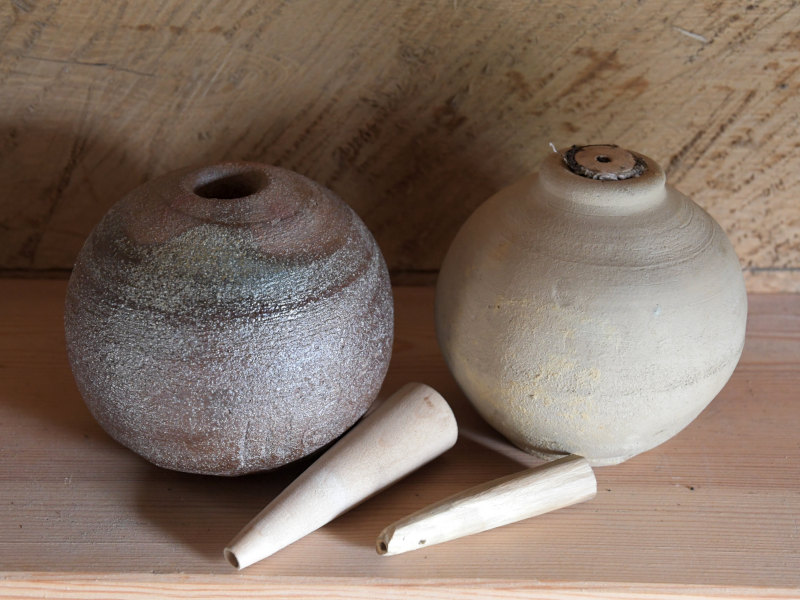 Our replicas are based on various originals from the 16th and 17th centuries, such as the types of Ingolstadt/Munich19) as well as the types of the Oberhaus Castle, Passau6). We used clay as raw material and a piece of birch wood for the fuse. We used non-combustible ash as a placeholder for the explosive filling. The body of the grenade is formed from clay and baked hard. The piece of wood is tapered so that it tightly closes the opening of the grenade body. The fuse channel is drilled lengthwise into the wooden plug until just before the narrow end. At the narrow end, three to four smaller holes are drilled or cut laterally into the ignition channel. Some powder substitute is filled into the ignition channel. Then the stopper is inserted into the grenade until it firmly closes the opening of the grenade. On some surviving originals, tiny remnants of a textile wraps have been detected on the fuse, which improves the sealing of the opening.
(The reconstructions shown here differ in some details from the originals, especially the fuse in the fuse. New reconstructions are nearly ready and photos will follow shortly.)